This is “the year of Craig Wiseman“… in terms of songwriting, that is.

It seems every song he pens these days becomes a mega-hit by some popular superstar, like Tim McGraw (“Live Like You Were Dying”, “Where the Green Grass Grows”, “The Cowboy in Me”), Kenny Chesney (“The Good Stuff”, “Just Another Day in Paradise”, “Young”), or Phil Vassar (“Just Another Day In Paradise”, “American Child”).

We were fortunate to get reservations to see Craig Wiseman, the 2004 Songwriter of the Year, performing at Puckett’s in Leipers Fork and telling the stories behind all the hit songs.

He brought along 2 of his songwriting friends, Tony Mullins and Bobby Terry. We were among the first to make reservations for this one! We were mostly excited to see Craig Wiseman. He brought two of his fellow ASCAP writers with him — Tony Mullins and Bobby Terry.

This night was a perfect example of the caliber of talented songwriters that perform on a regular basis at Puckett’s!

Craig Wiseman Had A Great Year! Craig opened up with the song he wrote for Trace Adkins, “Rough & Ready”. This fast-paced song is loaded with country twang and makes fun of a lot of stereotypes associated with middle-class country folks.

Next, Craig was excited to share with us a brand new song that he had just penned the day before in a matter of 35 minutes, and he had such confidence in this song that he went down and demo’d it the very same day.

He said that Blake Shelton’s hit, “Some Beach” made him think up the words to this particular song. It’s a cross between “Some Beach” (a play on words — where you think that 2 very different words are actually being said) and Hank Williams Jr.’s “Why Can’t We All Just Get A Looooong… Neck Bottle?!” (another play on words). Craig’s song is something along those lines… a guy is frustrated with a day gone wrong and he comments, “Aaaaa BUCKET… full of beer”.

The Songwriter Behind All Those Hit Songs Craig talked about how his hit songs actually came to be… the story behind the songs. Like 2 Kenny Chesney songs: “The Good Stuff” and “Young”. Craig said that “Young” was inspired by a letter he received from his alma mater to attend their Class Reunion. He also said there was actually a 3rd verse written to this song, but Kenny opted to stick in a guitar solo instead. In Craig’s original version of this song, the 3rd verse alluded to the passing of time and the natural occurrence of thinning up top (hair) and thickening down below (belly). Craig also told us how the Brooks & Dunn song “That’s What It’s All About” came to be. He said he was in London with his friend Steve, who had a new baby. They were ready to go out for a night on the town when Steve was rocking his baby in his arms, and the baby spit up on his Hawaiian shirt. Craig remarked, “Hey, that’s what it’s all about!…” Alluding to the daily nuances when you have kids and a family… This song is about the simple things, the things that remind you to step back and take a look at what’s real and what’s important in life.

What Do Necks, Trash, and Collars Have To Do With Anything? It just so happened that Tony Mullins was the one (of the trio) to sit closest to the large American flag that covered the entire side window at Puckett’s. He also happened to sing a song about the Red, White & Blue. It went something like this: “Red neck, white trash, and blue collar…” This song’s all about the delivery. It’s all in the presentation, and no one can deliver such a song like Tony Mullins! 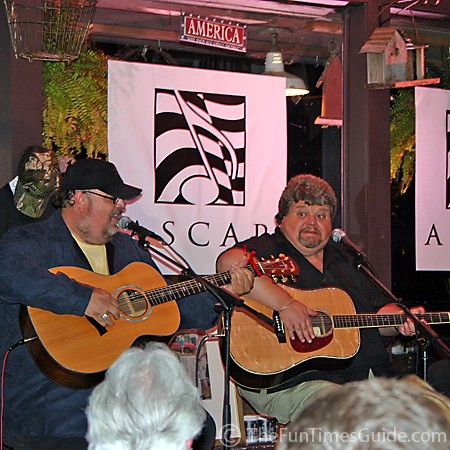 Craig Wiseman and Tony Mullins seem like best buds from “way back”. They are the perfect duo — each plays sidekick to the other. Craig followed up Tony’s “Red, White & Blue” song with his own snappy, hilarious chant song called “You Da Man”. The entire audience was participating! This is an example of how people are willing to sit among the canned food items… even stand in the aisles… to be able to see these multi-talented singer/songwriters at Puckett’s Grocery in Leiper’s Fork, Tennessee every Friday night.

Tony Mullins Explaining One Of His Songs Tony sang a lot of songs that aren’t hits… yet. In fact, most he probably hasn’t even pitched yet. He was just in a wisecracking kind of mood this evening (which isn’t all that unusual for Tony… it’s hard to get this guy to be serious for any length of time).

A Couple Of Wisecrackers Tony got the crowd all riled up and singing along to his many country-redneck songs, including: “Hillbillies at Work” which is a cross between Gretchen Wilson’s “Redneck Woman” and The Charlie Daniels Band’s “Devil Went Down To Georgia”. Craig referred to him singing as “GI Joe on crack!”

Tony Sings Some Serious Songs Too Tony shattered all audience expectations, when he started strumming his guitar soft and slow and broke into a heartfelt song about being a large-sized man (as Tony is). Of course, the audience presumed that this song, like all Tony Mullins songs, would have a sudden change of pace and Tony would break into some comical nonsense turning this ballad into a sattire… but it didn’t. And, what a song it was! It went something along the lines of: “It ain’t easy being a man of my size” and “how is it that a man of my size fits in the palm of her hand”. By the 2nd verse you realize it’s not a comical song at all. It’s about his little girl. (It’s not often you get choked up over a Tony Mullins song!)

Just Another Day In Paradise Every single song that Craig sang tonight was one that had been a major hit for him. He’s got SO many hits… it seems whatever this guy pens probably gets picked up by a major superstar these days! Here, he’s singing Phil Vassar’s “Just Another Day In Paradise”. To be able to say that we’ve been in the same ROOM with such a talented writer as Craig Wiseman is amazing. (And his singing’s not that bad either!) Any time this guy’s pen hits the paper these days, the song becomes a megga-hit. Even though Tony Mullins is one unique character who finds it hard to sit still and be serious, he showed us tonight that he’s a very sentimental guy who shines from the sidelines. And don’t let all his “nonsense” songs fool ya… this guys a major songwriter who’s been around the block a few times. He’s a superstar writer AND performer! Bobby Terry is songwriting’s hidden secret. He’s good! He’s a great writer, great singer, and great guitar player. And he’s got heart of gold, which leads him to write a lot of sweet ballads.

The Lighter Side Of Songwriting One thing’s for sure: Tony Mullins always gives you another way of thinking about any situation! He’s a master of words, and can turn virtually ANY scenario into a hilarious song.

Now He Knows How Forever Feels Tony had everyone singing along to his Kenny Chesny hit, “How Forever Feels”. The trio on stage really got into it, as did the entire audience. Craig had such a great year this year. He even took home the ASCAP Song of the Year award for his song, “Live Like You Were Dyin” which Tim McGraw made popular. He wrapped up the whole show tonight with a wonderful rendition of this heartfelt song, with Tony Mullins (and the entire audience) clapping and singing along. One thing that I think is HILARIOUS… Whenever we’re at these songwriter nights, only a handful of people usually bring cameras. And whenever a singer breaks into a wildly popular hit song, they feel the need to snap TONS of pictures at that very moment — as if him singing that song will be obvious from the photograph! We weren’t familiar with Bobby Terry or his songs before this night, but we were pleasantly surprised by his: a) guitar playing and b) fun songs and ballads. Some of which included “Ain’t Got Jack… But I Got Jill” (a great tongue-in-cheek song about how he ended up marrying his wife, Jill). Tonight we learned that Bobby has a few hits out on the radio these days too. He has composed the music for a number of popular hit songs.

A Song About A Girl Bobby sang a song he penned about being addicted to a girl. Something about “what a way to go, being addicted to a girl” and how you should “play it safe, cuz it ain’t worth the risk”. He also sang a funny yet serious song about his respect for a woman who was used and abused in a former relationship that included this line directed at the former abuser: “I worship the woman you walked on.”

Now I Know How Things Get ‘Lost In The Mail’!